A podium for the Baltic Sea region

World-famous musicians such as Mstislaw Rostropowitsch, Kurt Masur or Ute Lemper have already attracted and still attract the Usedom Music Festival to the island of Usedom, but also guests of state such as Queen Silvia of Sweden, Mikhail Gorbachev, the German Chancellor or former German Presidents. For three weeks from September to October, visitors to the festival, which brings together the countries of the Baltic Sea region, experience the stars and treasures of music from the Baltic Sea region. The annually changing country-focus then shows the whole musical diversity of Northern Europe. At the special concert venues on the island of Usedom, the Usedom Music Festival allows visitors to experience the incomparable atmosphere of a cosmopolitan two-country island facing the states of the Baltic Sea region. The musical riches of the countries and regions connected by the sea are staged in atmospheric churches, picturesquely situated castles, the magnificent buildings of the imperial baths or in Mecklenburg-Vorpommern’s largest industrial monument in Peenemünde. ‘The Usedom Music Festival makes not only the island, but a whole region resound. In fact, the cultural island of Usedom is part of a large family that the Baltic Sea does not separate, but rather connects,’ said the German Chancellor during the celebrations of the festival’s 25th anniversary.

The Usedom Music Festival brings a high musical level to the island of Usedom, a popular touristic region.

... undoubtedly one of the most exciting music festivals in Germany due to its original and high-quality programme and definitely worth a trip to the far north not far from the Polish border.

Musical pearl and one of the biggest thematic festivals

The history of the event series began in 1994, with the aim of showing guests how beautiful the island can be in September, after the end of the school holidays. The director of the Usedom Music Festival Thomas Hummel won Kurt Masur, Gewandhauskapellmeister in Leipzig and also chief conductor of the New York Philharmonic Orchestra, as the first patron. He also established a connection to the New York foundation Young Concert Artists. From there, prize winners of the international competition of the same name came to the beach of the Pomeranian Bay. A small transatlantic bridge that still stands today.

Since 1999, the Usedom Music Festival has established itself as the ‘Podium of the Baltic Sea’: every year, one country in the Baltic Sea region is now exclusively at the centre of the programme for the duration of one season – with its music and its musicians. Ten countries belong to the Baltic Sea region: Norway, Sweden, Denmark, Germany, Poland, Lithuania, Latvia, Estonia, Russia and Finland. There are countries large and small, countries with famous musicians, countries that have tended to be in the shadow of other celebrities. At the Usedom Music Festival each of these countries gets the same space, the same attention.

This commitment to bringing people together has already been honoured by numerous awards: In 2006 the Tryton Cultural Prize of the city of Swinoujscie, in 2012 the multinational orchestra Baltic Sea Philharmonic, initiated by the Usedom Music Festival and Nord Stream AG, received the honour ‘Excellent Place – In the Land of Ideas’, in 2015 the orchestra received the European Cultural Award as ambassador of the Baltic Sea region and in the years 2015 to 2018 the Usedom Music Festival carried the EFFE seal of approval of the European Union for its ‘artistic and social commitment with an international and global perspective’.

The Peenemünde concerts are also unique in the German festival landscape. Together with the Historical-Technical Museum and the Northern German Radio, the Usedom Music Festival put the turbine hall of the Peenemünde power station into operation as a concert hall in 2002. Where rockets used to be developed and tested, applause now roars. During the ‘Third Reich’, the Peenemünde Army and Air Force test facilities were working on the development of ‘secret weapons’ – including the Aggregat 4 (‘V2’), the world’s first large rocket. It brought death to many thousands of people, but it was also the first successful launch into space. Today Peenemünde is a place of international encounters and peace education with its museum in the power station, cultural events, special exhibitions, project days, workshops and work camps.

Under the direction of Mstislav Rostropovich and with over 250 musicians involved, Benjamin Britten’s ‘War Requiem’ was performed in the turbine hall of the former power station. Since then, conductors of international standing have been engaged. Kurt Masur, appointed Honorary Patron of the Usedom Music Festival in 2012, gave three of his last concerts and two international master classes for young conductors here. Krzysztof Penderecki (2003, 2014), Christoph von Dohnányi (2004), Esa-Pekka Salonen (2005), Alan Gilbert (2006), Andris Nelsons (2007), Christoph Eschenbach, Kurt Masur † (2012 and 2013) and Neeme Järvi (2010, 2013), Paavo Järvi (2013) and Kristjan Järvi (2008, 2009, 2011-2018) and many more consolidated the high musical standards of the Peenemünde concerts.

Today the former rocket factory in Peenemünde is full of music and peace thoughts, and this is exactly what the Usedom Music Festival is all about.

Music education at the heart

Since 2006, a gem of the island has enriched the festival: the castle of the Count von Schwerin family in Stolpe, located in the very south of the Stettiner Haff. Together with the Stolper Schlossverein, the Norddeutscher Rundfunk and the Tonkünstlerverband Mecklenburg-Vorpommern, the Usedom Music Festival has created the Baltic Sea Music Forum. Year after year, the Lithuanian cellist David Geringas gathers highly talented master students around him and presents the results of their joint work in a concert.

In 2008, the Usedom Music Festival took a big step into the wide world: with the support of Nord Stream AG, a new orchestra was founded – the Baltic Sea Philharmonic. The Estonian conductor Kristjan Järvi gathered excellent young musicians from all ten Baltic Sea countries and formed a new orchestra with his energy, his musicality and his enthusiasm for the culture around ‘the Mediterranean of the North’. From its base in Peenemünde, the orchestra has since conquered the whole of Europe and has become an ambassador for Usedom in the concert halls of the world.

In addition to the three-week regular festival in September and October, the Usedom Music Festival also includes the Usedom Literature Days in spring and the International Days of Jewish Music. The Young Usedom Music Festival with children and youth projects as well as the competition of the Achterkerke Foundation are firmly integrated into the main festival.

In the meantime, the Usedom Music Festival attracts up to fourteen thousand guests per year from home and abroad and radiates – also through the radio broadcasts of its concerts – far into the world.

Kurt Masur on the Island of Usedom

Kurt Masur has accompanied the Usedom Music Festival since its beginnings in 1994. With recurring stays on the island, whose magnificent nature always made the maestro enthusiastic, numerous performances and a surprise visit, the great conductor left traces on Usedom.

Traces in the Sand

The landscape of Usedom attracted the maestro and his wife Tomoko Sakurai-Masur again and again to the island at the Pomeranian Bay. On 9 September 1994 the soprano gave the first concert of the Usedom Music Festival on the pier in seaside resort Ahlbeck.

Experience and mastery met passion and community spirit – Kurt Masur and the Baltic Sea Philharmonic joined three unforgettable concerts and the joyful experience of learning with and from each other. Kurt Masur on the orchestra, which was awarded the European Culture Prize 2015: ‘The spirit of these young musicians is overwhelming!’

Right after the first season of the Usedom Music Festival Kurt Masur established contact with the renowned ‘Young Concert Artists’ foundation. Since 1995, the young prize-winners of this demanding competition with its final rounds in Leipzig and New York have been regular guests on Usedom.

The international master classes for young conductors were legendary. In 2012 and 2013 Maestro Masur taught highly talented conducting students from Germany, Norway, Austria, South Korea, Russia and the USA in the Historical-Technical Museum in Peenemünde.

The Usedom Music Festival connects countries and people. In the course of time, many friendships with and around Maestro Masur developed on Usedom. Not only Kristjan Järvi, the founding conductor and artistic director of the Baltic Sea Philharmonic, founded by the Usedom Music Festival and Nord Stream AG, appreciated being together with the great conductor.

From 1936 to 1945, Peenemünde was the largest military research centre in Europe. On an area of 25 km², up to 12,000 people worked simultaneously on new types of weapon systems, such as the world’s first cruise missile and the first functioning large rocket. Both were designed as weapons of terror against the civilian population, were largely manufactured by forced labourers and from 1944 onwards were used as “weapons of retaliation” during the Second World War.

The Historical-Technical Museum in Peenemünde reappraises the history of the origin and use of these weapons. The exhibitions document who worked in Peenemünde, how the people lived and why the enormously elaborate weapon projects were carried out.

The turbine hall, in which electricity was once generated for rocket production, has been available as an exhibition and event hall since 2002 thanks to funding from EU and state funds. Every year, the Usedom Music Festival holds its annual Peenemünde concerts here – a unique cooperation in the German museum and festival landscape.

Under the direction of Mstislaw Rostropowitsch and with over 250 participating musicians and soloists from Russia, Great Britain and Germany, the historic site was opened in 2002 as a concert hall for a few moments a year. Benjamin Britten’s “War Requiem” could be heard in the turbine hall of the former power station. Since then the Usedom Music Festival has been able to engage world-class conductors in Peenemünde. Kurt Masur, appointed Honorary Patron of the Usedom Music Festival in 2012, gave three of his last concerts and two international master classes for young conductors here. Krzysztof Penderecki (2003, 2014), Christoph von Dohnányi (2004), Esa-Pekka Salonen (2005), Alan Gilbert (2006), Andris Nelsons (2007), Christoph Eschenbach, Neeme Järvi (2010, 2013), Kurt Masur † (2012 and 2013) and Neeme Järvi (2010, 2013), Paavo Järvi (2013) and Kristjan Järvi (2008, 2009, 2011-2019) and many more consolidated the high musical standard of the Peenemünde concerts. 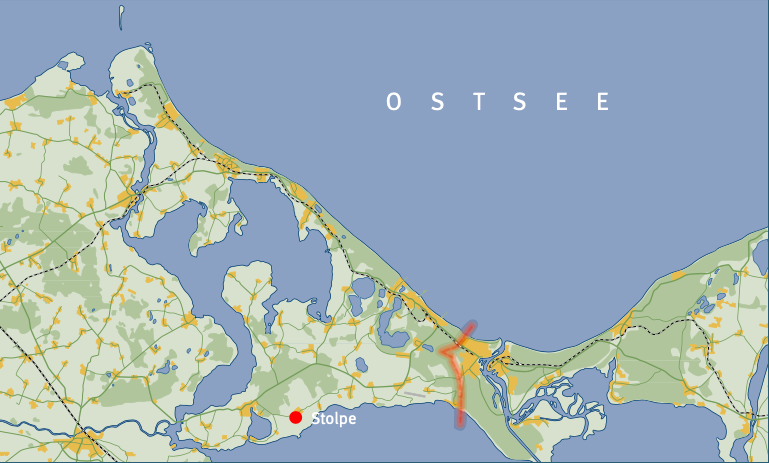 Since 2010 the concerts of the Baltic Sea Music Forum with and around the Lithuanian cellist David Geringas and his master students form the cultural highlights in this jewel of the island history and architecture.

First mentioned in a document in 1251, the castle was the ancestral seat of the Counts of Schwerin, except for a few interruptions. In the following centuries the Pomeranian dukes were guests several times. It was not until the late Renaissance (1568-1612) that a building was erected which represents the core of the present castle: a two-storey building on a rectangular ground plan with the typical Renaissance blind gables and horizontal cornices. The castle is one of the most important Renaissance buildings in Western Pomerania. Badly damaged during the Thirty Years’ War, the building underwent numerous reconstructions in the following centuries. The simple baroque manor house was turned into a respectable residential castle, which remained in its function until 1945. After the Second World War and nationalisation, the building became increasingly dilapidated, which could only be stopped in 1995. Since then, the community and the Förderverein Schloss Stolpe e.V. have endeavoured to put the estate to a multi-faceted cultural use.